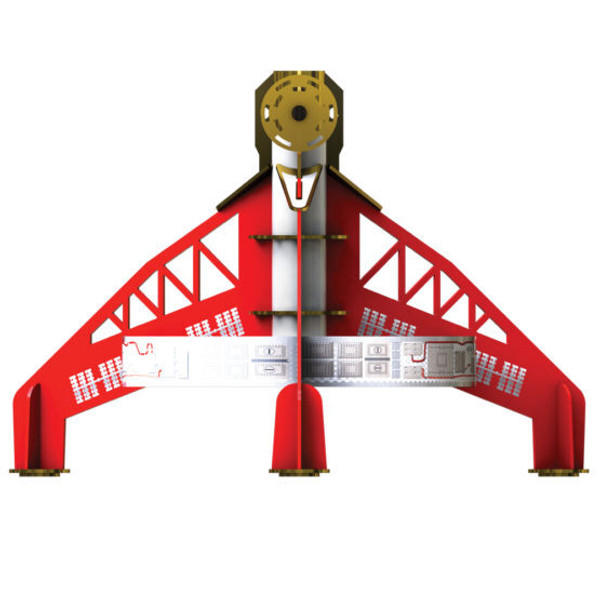 The Lunar Scout series of remote, robotic space probes was crucial to the success of the new lunar landing program of the late 2020s. This automated craft had a single, critical directive: map the moon's surface in exacting detail to identify prospective sites for the Second Giant Leap as that series of lunar landing missions eventually become known. Designed to be inexpensive to manufacture and proven reliable after more than a dozen flawless lunar landing and mapping missions, Space Corps later adapted the Lunar Scout to explore Mars and its twin moons Phobos and Deimos.

The Estes Lunar Scout is a lightweight model of this future historic space probe that will one day play such an important role in humanity's return to the moon. With just enough detail to make this a fun but challenging build, the Lunar Scout is right for all levels of model rocket crafters. This Intermediate-Level kit features laser-cut cardstock fins and other structural parts that come together to form an amazing flying model rocket. Intricately designed water-slide decals add an additional note of realism. The full-size Lunar Scout may not actually exist quite yet, but this model looks real enough to do the job now!

Compact and lightweight, the Estes Lunar Scout is designed to fly well on smaller engines. A maximum altitude of 200 feet can be expected using the EstesA10-0Tmini engine. Engine options for lower altitude flights are also available. The Lunar Scout features featherweight recovery the rocket is engineered to fall back to Earth after powered flight and land unharmed, ready to take another engine and fly again. With relatively low altitude launches and a rapid featherweight recovery, the Lunar Scout makes for a great small field flyer. No need to wait for NASA to create their Lunar Scout build and fly yours today!

NOTE: Engines are sold separately and must be collected in store.